The tour, the tactics and the trip to Jersey: An insight into the world of the British and Irish Lions 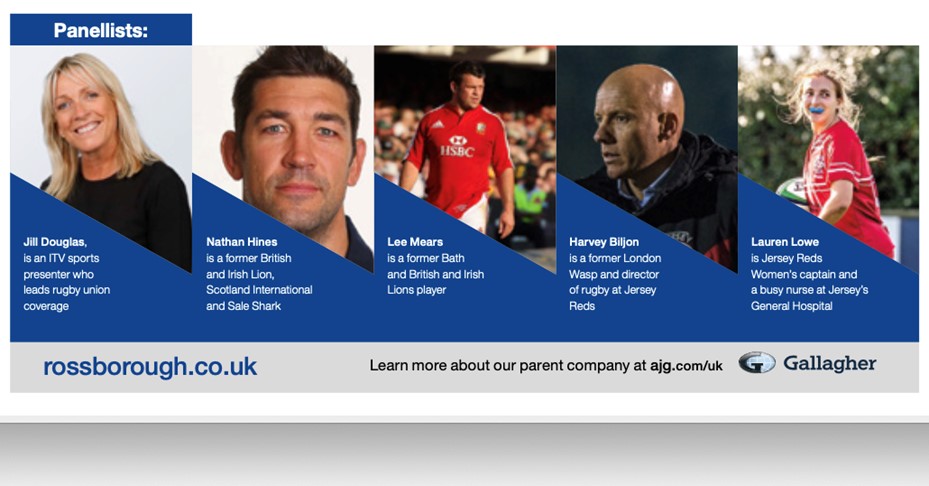 On Wednesday 16th June, ITV’s Jill Douglas hosted our free webinar: The tour, the tactics and the trip to Jersey: An insight into the world of the British and Irish Lions.

The webinar, saw former British and Irish Lions, Nathan Hines and Lee Mears, share their experiences of playing a Lions test series against South Africa – the last one to take place in Africa in 2009. The players were  joined by Harvey Biljon, director of rugby at Jersey Reds and Lauren Lowe, Jersey Reds Women’s captain.

The webinar can be watched again by clicking here:

“As sponsors of Jersey Reds Women’s team and as a part of Gallagher, sponsor of The Rugby Premiership, we are passionate about sport and sporting excellence and the important role sport plays in our communities. With Nathan Hines and Lee Mears on the panel, players who fronted up to the Springboks in 2009, the event was incredibly insightful,” said James Anderson, Group MD, Rossborough Insurance.

Please note, Rossborough has no official association with the British and Irish Lions.